Ever heard “he’s my second cousin twice removed” and wondered what it meant? Perhaps you’ll remember Pippin similarly explaining how he is related to Frodo Baggins in the motion picture The Lord of the Rings – The Fellowship of the Ring.

Family relation explanations can be quite difficult to follow; you can easily become lost in “8th cousin once removed” jargon and talk of half cousins and so forth.

How this designation for distant relations works is actually quite simple once you’ve seen a few examples. Diagrams really help me, so that’s what we’ve included here.

This “second cousin twice removed” and similar designations are used if you have a common ancestor with another person.

The jargon we’ll talk about describes how you and your second cousin, for example, are related to the common ancestor and to each other.

The “second cousin” portion of the explanation is termed the degree and represents the number of generations in between the common ancestor and the closer of you or your “cousin” to the ancestor.

The “twice removed” portion indicates the number of generations you and your “cousin” are separated or removed from each other. My head hurts already. Let’s show some pictures and that will help. 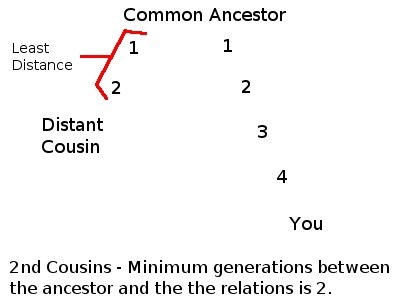 Whoever is closer (has the fewest number of generations to get back to the common ancestor) is the person that defines the “degree” or the “second, third, fourth, etc. cousin” designation. It doesn’t matter who is closer. The important thing is the number in this case.

Following the example above, the “twice, third, fourth, etc. removed” designation of the relation is defined by the generations separating you and your distant cousin.

For example if both you and your distant cousin in this example were equally separated from the common ancestor by 2 generations, you’d be second cousins with no removal phrase attached. In this example, there is a difference in the number of generations back to your common ancestor; the difference in generations between you and your distant cousin becomes the “removed” portion of the description. 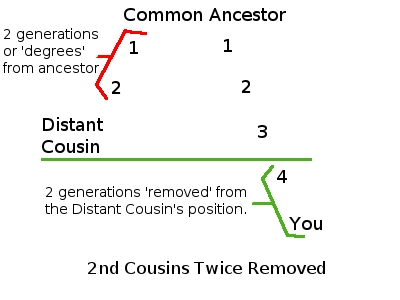 So, for the example above, you are second cousins twice removed. There are a lot of different charts you can use to figure these relations out, but simply writing numbers or names of the generations in between the ancestors has been helpful for me.

If you prefer text examples as opposed to picture examples, the following examples are for you.

The children of my uncle and aunt are my cousins. Hopefully, we all understand that. We are considered first cousins because there is only one generation in between us and our common ancestors (our grandparents).

Quiz – Test your knowledge of family relations. It’s one thing to read it, it’s another to try to figure it out. Go ahead, I dare ya! Turn your computer screen upside down to find out if your answers are correct (just like quizzes on the back of a cereal box) except cereal won’t fall out when you try it.

Question 1 (Easy) – What is the degree and removal (if any) between you and your cousin’s child?

Question 2 (Moderately Difficult) – What is the degree and removal (if any) between you and your great uncle’s great-great grandchild?

Question 3 (Difficult) – What is the degree and removal (if any) between you and your grandpa’s cousin’s child?

Answers to the Quiz – Use caution when adjusting your monitor. Alright, alright, print the results and turn the page upside down.